I have so much to be thankful for and the songs of the Greatful Dead does have a great meaning in our years together as a family. The song ‘trucking’ makes me smile whilst I cross the provincial border several times to take much needed citrus to a small town where children needed it more than I did.

Truckin', got my chips cashed in
Keep truckin', like the do-dah man
Together, more or less in line
Just keep truckin' on

Every bag of nartjies filled with Vitamin C filled me with purpose.

Truckin', like the do-dah man
Once told me, "You've got to play your hand"
Sometimes the cards ain't worth a dime
If you don't lay 'em down

Bringing back autumn pear leaves from the trees lining the trees, which finds it was back into ice pages takes me to Land Art and reconnecting with earth, water and air. The light beautiful, the sun setting earlier behind the mountains as we move into winter. 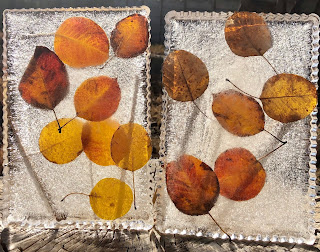 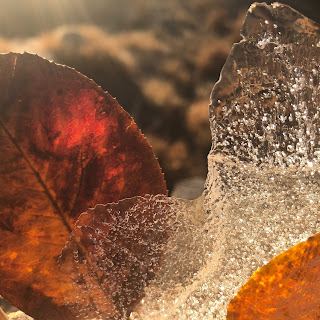 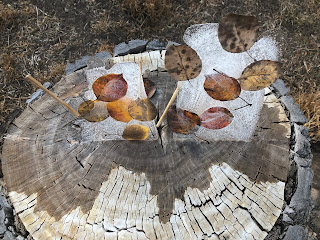 Posted by Erica Lüttich at 1:21 PM No comments:

Whilst I was trying to recover from the loss of a friend, re-connecting to my partner (a piece of paper connects us forever) dying and relocating my life, the call for Lost Connections came. Ellis Schoonhoven from the Netherlands, Nijmegen in Gelderland send this creative call for global participation, on the 25 Million Stitches Facebook page. The question what have we lost and how have we lost each other came at a time when I was unpacking 60 boxes, repacking a 100 and dishing out fabrics, wool and more to people in Touwsriver who needed fabric.

Although I connected fast with Ellis via Facebook or so I thought it was interesting that Afrikaans and English were taken already and then when in crisis choose German, but it was also selected. Well, here we live in South Africa and I can choose from so many other languages, which pleased me no end. I chose Sestwana and Sesotho. But then I needed to find meanings, symbols and what our country means to me. In this journey of learning discovering and engaging with what it is we really are all about, we were already deep into lockdown. As in days of no people visiting, bits of emergency shopping and isolation. 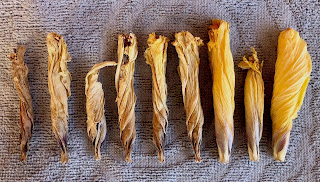 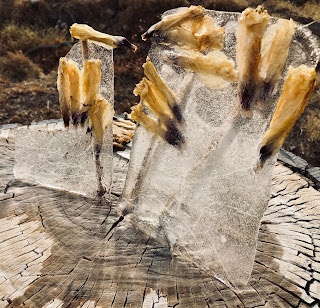 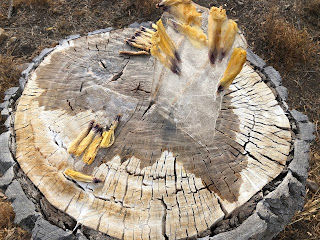 The Lost Connections took on such a powerful construct in my life and then the night came that my dear and very sick life partner left. I was very lost, trying to console those who needed it and then realised that life is so hard crashing into us as a family. The tears just could not come as it was not tangible, we decided that we were going to do this together, he will go and I will be with him but all the permissions needed was just not playing along. And off course it is complicated, but that was our promise to each other and I really wanted to be there with him.

So weeks followed doing all the important things, decisions choices, wills, letters and more. Not what I wanted to work with, not what I was hoping to achieve with my time. Searching for languages is powerful, and has so much meaning and the circle of 32 cm was easy to embroider so was the languages, Zulu, Xhosa, Sestwana, Sesotho found themselves on the cloth in no time, but then it was Shona, Yoruba, Hindi, Chinese or one of the many dialects, Swahili and it filled my days with letters wonder and much meaning. As I stitched in gold thread which I found in my mothers cupboard, my own boxes unpacking again, the threads acted so differently not at all what my hands and needles were used to. Gold thread is hard, it breaks, and it tears, stretches and pulls the linen cloth. Like life. 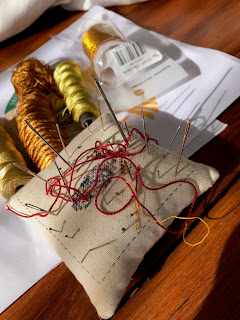 I found our symbols on the coat of arms, something I have never engaged with…nationalism worries my no end…but the elephant tusks found their way onto the cloth, a symbol of strength, the golden wheat symbolises growth and fertility, the triangles which acknowledges craft whilst in most circles despite our protest is a direct nod to women, and the ‘Unity in Diversity’ in San language. The protea was already taken by the Afrikaans cloth (and already beautifully delivered to Nijmegen) and I decided that I do not need the diamonds in my live. 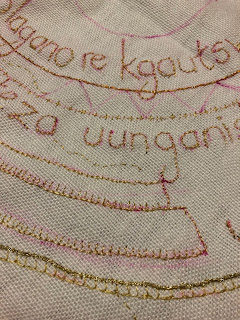 The red pencil I used to write and draw with decided to bleed into the white linen, and days of soaking just changed it into pink. It was like my own wounds just washed from my hands and needle into the cloth. I re-stitched every single letter again to hide the pink. I found new golden thread and searched for beads around De Doorns. In a small town it is remarkable how people reach out to each other and I forgave my heart and head all the previous stories and wrong words of small places.  In the end a small piece of netting beaded like a doillie from so many cultures and tradition in our country found a space in the middle of the cloth. 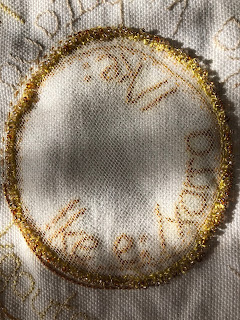 With much trepidation I stitched the last stitches and then the sense of loss returns like a tide and sweeps your feet out under you. No words and songs from Eric Clapton helps. I listen to my father’s music on his computer in his office when I need to write and he has from Jazz to Eric Clapton, Ry Cooder and Handel. It helps to connect the lost notes, it helps to make the spaces in-between less painful. 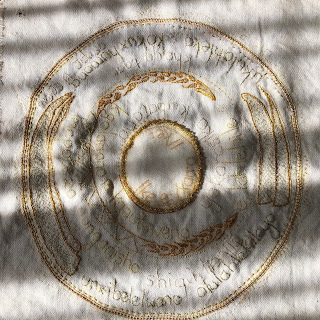 Posted by Erica Lüttich at 1:08 PM No comments:

Early on in 2020 whilst packing and sorting for my migration to the Hex River Valley I found an interesting call on Facebook for embroiderers. As it was during a time I was still trying to find myself (if that is at all possible) the theme or idea of home still was part of my own migration and the meaning therefor in my mother tongue, was a great challenge. 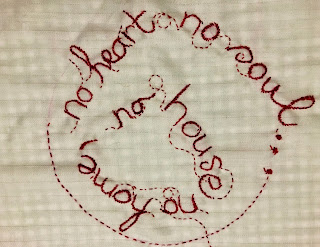 Li Ching Kathrin Wang send out a call for artists to describe home in their language and stitch in red cotton these words onto white cloth 20x30 cm. So many people worldwide responded in the most amazing way. 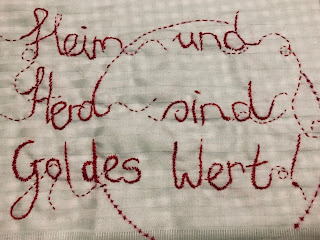 And as I can only do as many as possible as the nights were long filled with mosquitoes and the days hot and intense, I managed to extend the one cloth to a few. 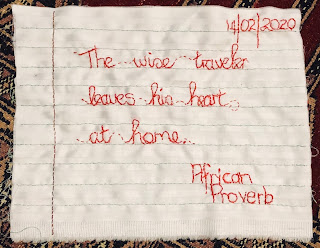 I enjoyed the newly found time and the explorations kept me connected. The loss of space, my own home, my animals, my friends, my life, I could bury these into the cloth using the stitches to wound my skin. 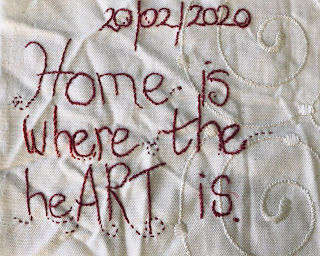 Posted by Erica Lüttich at 12:49 PM No comments:

This project was started by Jennifer Kim Sohn from Sacramento. My participation (besides being compulsive) was completed in December 2019, De Doorns. I feel a great sense of walking and connecting the footprints between the words of Weihnachten, celebration, family and goodwill. Again I try to stitch in as many conversations around the landscape, refugees and the migration of families, after all, I am the child of a migrant. 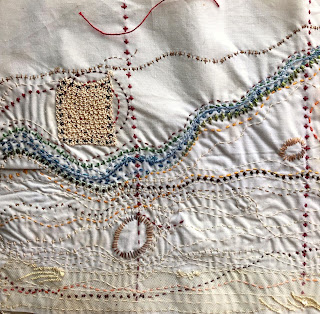 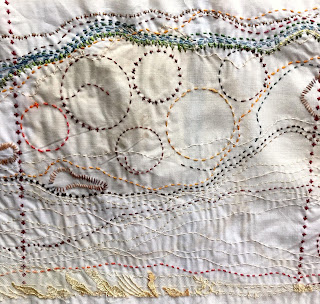 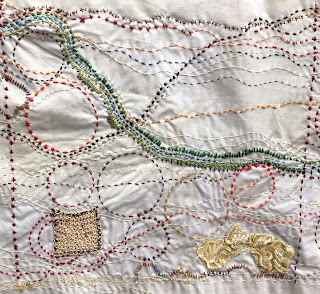 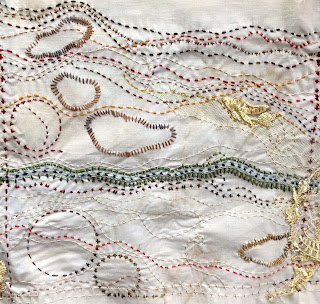 And is meant to be 'read' from right to left.

'Mindfull Stitching' is about recording thoughts and anxiety around the safety of 6,7 million refugees from Syria, from Afghanistan there are 2,7 million people migrating, and in Myanmar the records shows 1,1 million people in panic and fear. From Somalia we hear of 900,000 people on the move and another 720,000 from the Sudan region. The Republic of Congo makes up the last of the current total of 720,300 refugees mostly coming to South Africa. 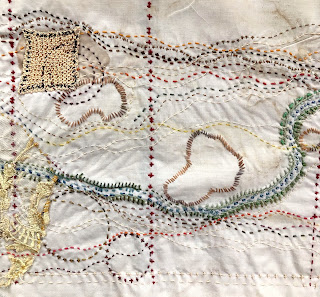 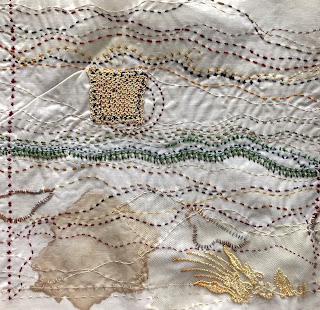 And sending the parcel to Sacramento in the next week to be part of the exhibition for Refugee Day 20 June 2020. 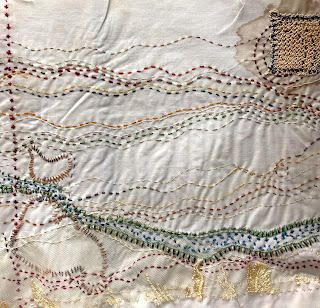 Posted by Erica Lüttich at 2:27 AM No comments: 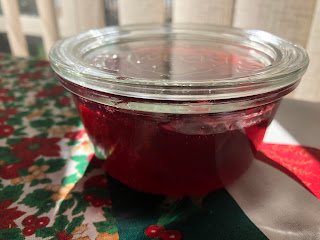 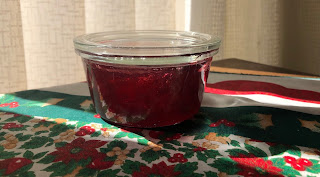 I worked on two cloths in Loxton for an exhibition with Sally Rumball for her Smalls Exhibition in December 2019. It is about talking softly in local languages from the Bo-Kaap to Namaqualand. 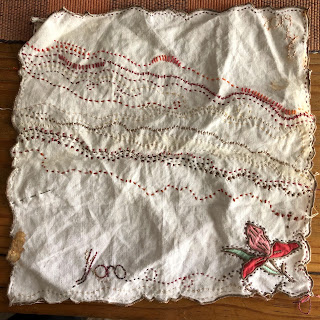 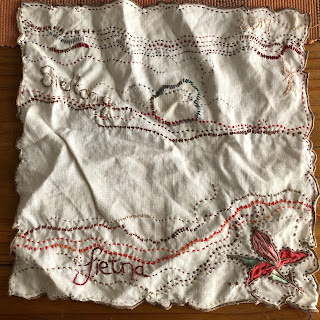 Posted by Erica Lüttich at 4:19 AM No comments:

Erica Lüttich
Erica enrolled at Unisa for a Fine Arts degree (1992) and this compelled her to become involved in community art projects. Her work in Sharpeville, Soweto, Hillbrow and Diepsloot is based on creative healing offering skills and participation in Art Projects. Her creative explorations with the Boitumelo Project, Hillbrow have won several awards since 2002. These collaborations not only address past histories but also develop individual creativity, a sense of self and economic independence for the crafters. FairPlay, a project initiated with several arts organisations in Johannesburg to engage with youth during the World Cup developing creative ideas around being fair and unfair. She is a founder member of Site_Specific, an international Land Art Event in South Africa. Collaborating with the Boitumelo Project they participate as artists, facilitating and teaching craft development with crafters. Erica’s sense of finding the creative, developing the positive and keen interest in story telling gives her a sense of energy and urgency that is contagious and positive.